Unique sold out Midnight Runway Run £40,000 and counting for charities

With a course like no other, runners took on the 3.5km Runway Run lit up runway on Saturday night.

Once again, CHC Helicopters and Aberdeen International Airport partnered up to bring the run to the Dyce terminal for a third year.

Back after a two year absence due to the pandemic the popular run sold out within days of tickets going on sale.

Aberdeen International Airports chosen charities We Too! and Kayleigh’s Wee Stars will benefit from the run along with CHC Helicopters chosen charity Friends of ANCHOR.

More than £40,000 was raised on the night with entertainment and an appearance from the popular Canine Crew Therapets at the event on Saturday night.

He said: “Bringing the run back has been fantastic and to see the support, hard work and fundraising efforts of the participants is humbling.

“Raising more than £40,000 now means the Aberdeen Runway Run has raised £100,000 over the years. A huge thank you to all at CHC Helicopters and Aberdeen International Airport and volunteers for making such an incredible event.”

Mark Beveridge, Operations Director at Aberdeen International Airport said: “This has been an amazing event and I would like to thank our team, volunteers and CHC for their hard work.

“Congratulations to all the runners that took part and we are proud to partner with CHC Helicopters to give runners of all abilities a chance to take part in this unique event.”

First place went to Jamie Reid who completed the course in 11 minutes 40 seconds followed by Blair Robertson in 12 minutes and 23 seconds and Mark McDonald was third with a time of 12 minutes and 33 seconds. 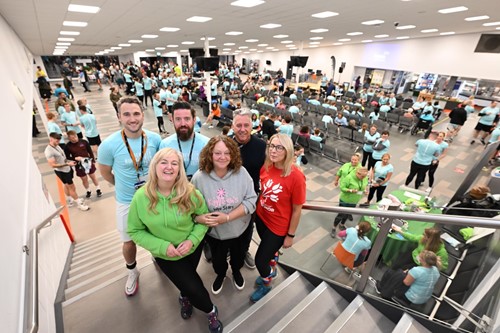 Erica Banks, communications lead at Friends of ANCHOR, said: “The Runway Run is a super event for Aberdeen and we’re really grateful to be part of the fun, the buzz and of course, the fantastic fundraising.

“It was great to be back at the start line of a race alongside the fundraisers who braved the chill and the midnight starting pistol, all in support of three local causes. Our sincere thanks to everyone who took part, and well done on the run!”

Phionna McInnes, Chief Executive of We Too, said: “We were delighted when we heard we were chosen as a charity partner of Aberdeen International Airport.

“The Runway Run is a fantastic and unique sensory experience to have been part of and the money raised will enable us to keep empowering parents and carers of children with additional support needs.

“A huge thank you to all the runners, volunteers and both CHC Helicopters and Aberdeen International Airport for a successful event.”

Fiona Heinonen, CEO of Kayleigh’s Wee Stars, said: “Being a part of the Aberdeen Runway Run is huge for our charity and we want to thank every runner and volunteer who have raised a fantastic amount of money for us and the other charities.

“CHC Helicopters and Aberdeen International Airport have done a tremendous job organising this unique event and we cannot thank them enough for the support.”