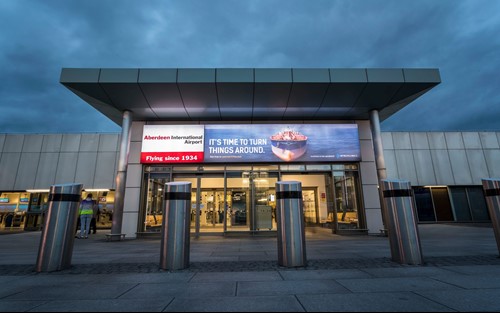 Aberdeen International Airport is in the running to be crowned one of Europe’s best airports.

Along with Torino and Cork airports AIA has been shortlisted in the Best Airport Award under 5 million passengers category at the ACI Europe Awards.

The ACI EUROPE Awards recognise excellence and achievement across a whole range of disciplines including the Best Airport Awards (in size category), the HR Excellence Award, the Eco-Innovation Award and the Accessible Airport Award in association with the European Disability Forum.

Winners will be announced during the Best Airport Awards Ceremony, which will take place virtually, as part of the ACI EUROPE Annual Assembly & Congress virtual event on November 17.

Aberdeen International Airport has also been nominated for Business of the Year at the Northern Star Business Awards (NSBA).

Hosted by the Aberdeen and Grampian Chamber of Commerce, the awards will take place next year.

Roger Hunt, interim managing director of Aberdeen International Airport, said: “We are delighted to be recognised as a finalist in this coveted award celebrating Europe’s top airports.

“We are up against some great airports in the under 5 million passenger category later this year.

“We are also pleased to have been recognised locally by the Northern Star Business Awards and the work done throughout last year and this year at AIA.

“It is great to see the hard work of the team at AIA and our partners has been recognised for the way in which we have continued to serve the North East of Scotland throughout the pandemic, including during a very difficult period of lockdown.”

The shortlisting for ACI Europe and NSBA follows the completion of the impressive £20 million terminal transformation project which was the largest development in the airport’s proud history.

It has led to the terminal growing its footprint by over 50% with many of its facilities significantly improved.

In July it was announced Aberdeen International Airport was shortlisted in four categories at the Scottish Transport Awards including Scottish Airport of the Year.

The awards are due to take place at the end of October.

The Digital Twin project, an online platform which creates a model of the baggage screening system and can be interacted with through virtual reality is also up for the Excellence in Technology and Innovation category.

The partnership between Aberdeen International Airport and the Canine Concern Scotland Trust for the popular Canine Crew, already an award-winning experience, has been shortlisted in the Transport Team/ Partnership of the Year.

The project is designed to reduce anxiety associated with travelling through interaction with therapy dogs and has now been internationally acknowledged as industry-leading.

Aberdeen International Airport is also up for the Excellence in Transport Accessibility for its special assistance services offered and engagement programme AccessABZ.

A series of health measures to provide a safe environment for staff and passengers as further services resume have also been introduced at the airport.

Passengers travelling through the airport must come prepared with their own facial coverings whilst all staff will be provided with personal protective equipment (PPE), including face masks. Protective screens have been installed in key areas, including the check-in and security halls, and passengers will be asked to observe safe, physical distancing wherever possible.

The airport has also enhanced its already thorough cleaning regimes with a specific focus on the regular disinfecting of all hard surfaces.

To find out more about the enhanced measures in place at Aberdeen International Airport visit: https://www.aberdeenairport.com/coronavirus/.