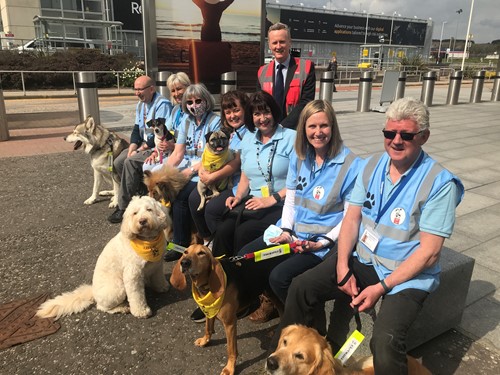 Paws-itive ambassadors for Aberdeen International Airport are back from furr-lough.

The award-winning Canine Crew will make their long awaited return to the terminal carrying out weekly visits.

The airport’s Therapets project, a partnership with Canine Concern Scotland Trust, is designed to reduce anxiety associated with travelling through interaction with therapy dogs and has now been internationally acknowledged as industry leading.

Fraser Bain, Airport Duty Manager at AIA and Diane Wood, lead representative and Trustee from Canine Concern Scotland Trust brought the initiative to the terminal which won the National Geographic Traveller’s Award for innovation in 2019.

A popular addition to the airport the Canine Crew visit all areas of the terminal including our re-tail and departures lounge cheering up anyone who has had a ruff day.

Fraser Bain, Airport Duty Manager at Aberdeen International Airport, said: “Our Canine Crew has been a hit with passengers and staff ever since our four-legged friends came to the airport.

“We are delighted they are able to return and build on the fantastic job that was already started before the pandemic.”

Diane Wood, lead representative and Trustee from Canine Concern Scotland Trust, said: “Our Crew are delighted to be back in the terminal meeting passengers and staff – and the canine crew members can’t wait to be off of furr-lough.

The Canine Crew also played a key role in welcoming visits to Aberdeen when the Sports Personality of the Year Awards came to the Granite City.

To find out more about Aberdeen International Airport and our Therapets programme visit https://www.aberdeenairport.com/aberdeen-airport-guide/special-assistance/therapet-dogs-programme/