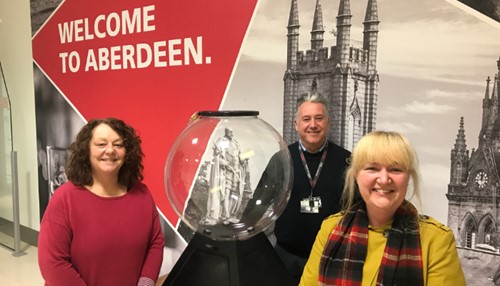 Aberdeen International Airport is delighted to announce Kayleigh’s Wee Stars and We Too as its new charity partners.

In December charities were asked to get in touch with the north-east’s major transport hub to put their organisation forward for a potential partnership.

A staff vote at the airport led to Kayleigh’s Wee Stars and We Too being appointed following the charities submitting a joint bid.

The partnership will see the airport commit future fundraising events and donations to the charities.

Kayleigh’s Wee Stars provides support to families where there is a child with a terminal illness through providing financial grants. Many families face increasing costs and unpaid time off work when caring for a terminally ill child. So, the basic purpose of each grant is to ease the financial burden on families during what is already an impossible situation so they can spend time with their child without the worry of money and make precious memories together.

We Too is a customer driven organisation empowering families of children with disabilities, providing a free, quarterly “What’s On” Guide for families with ASN children, peer support, a monthly children’s club and a school holiday programme as well as bespoke ASN/Customer Service Training to organisations and six-week parent/carer and sibling courses.

Mark Beveridge, Operations Director at Aberdeen International Airport, said: “We are delighted to announce our official charity partnership with Kayleigh’s Wee Stars and We Too.

Our charity partner is chosen by our own airport staff with a remarkable majority voting for the unique joint bid the charities submitted.

“We look forward to working with both charities in the coming year and hope that our fundraising efforts will contribute to the continuation of their life changing work in Aberdeen and Aberdeenshire.”

Phionna McInnes, Chief Executive of We Too, said: “We are absolute delighted and want to say thank you to Aberdeen International Airport staff for choosing us as a charity partner.

“Being part of a joint application with Kayleigh’s Wee Stars was an exciting prospect and we are looking forward to working together with the airport and its staff.”

Kayleigh’s Wee Stars co-founder, Jonathan Cordiner, said, “We’re thrilled to have been chosen by Aberdeen International Airport staff as one of their charity partners of the year. This is our 10th year and the partnership will make a huge difference to our ambitious target to raise £100,000 to ensure our longer-term viability and will give us confidence that we will be able to continue supporting families until 2023 and beyond.

“And to be part of a joint application with We Too is really special too.  We know this is an unusual approach, but we believe that as two small organisations, we’re stronger together and each can bring something unique to the partnership with Aberdeen International Airport.  We’re excited to see what we can achieve together.”

Tens of thousands of pounds were raised with the last charity partnership with Befriend a Child which came to an end in 2020.